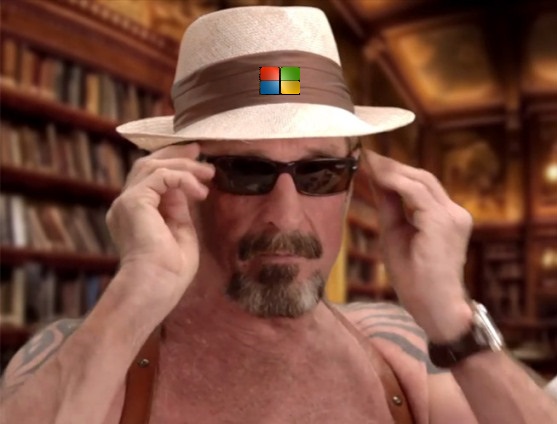 Apple [AAPL] is less itself without Microsoft. Cupertino’s old frenemy seems beaten and battered today, losing every hand it plays and now in a show that seems likely to be a whole lot less thrilling than ‘X-Factor’, the company seeks a new CEO. Apple needs its foe to function, so who will the new boss be? It’s unlikely to be the person it should be, and that person is John McAfee.

John McAfee? The wild child of Silicon Valley, wanted by police in connection with a South American murder investigation; a controversial character who launched the much-needed anti-virus industry and now hopes to make you invisible from the prying, spying eyes of the NSA? That John McAfee? Really?

Think about it: if ever a giant corporation grew boring and political and lost its edge, it has been Microsoft.

Sure, there’s so much that’s innovative going on inside its r&d departments, but those things that emerge are sanitized beyond soul; so much in thrall to some utilitarian everyman concept and subject to so much silo-based political in-fighting that most of the company’s products elicit little more than yawns.

Even Office — mainstay of the enterprise culture — doesn’t seem to fill the seats these days, feature-bloated, expensive, with a user interface you need to take a degree in to make any sense of at all. When its customers consider its licensing fees they consider them confusing and designed to separate them from as much cash as they can. Some critics may even see the cost as a form of platform-based extortion built atop the company’s hold on the office productivity market.

With a charisma deficit to deal with, a precipice to fall over as customers look elsewhere and a distinct lack of excitement surrounding the company and its products, what will Microsoft do?

Life on the edge

None of these men (and why are they all men?) seem to offer that special extra touch of madness and charisma that will make Microsoft seem interesting again.

The company doesn’t need some corporate fat cat to lead it into its last battles, it needs a leader with charisma and excitement — someone who may be prepared to do the unexpected thing.

Is this too much to ask for from a firm at the forefront of an industry that’s fundamentally not yet even middle-aged? Has technology really become so stolid and staid? Is it right that it has, if it has?

Technology has rapidly redefined human experience, so surely the firm’s at the top of that experience should somehow represent the power and optimism of the population’s greatest dreams?

If we agree this to be the backdrop to the decision, then what’s wrong with a maverick like McAfee as new MSFT cheerleader? He’s charismatic, unpredictable, many don’t trust him, he lives life on the edge and he’s a rock ‘n’ roll CEO for the baby boomers and beyond. He’s also super-smart and been part of the industry from the beginning.

Think how funny it would be if he used his new position to put the anti-virus business out of business by making major improvements to the insecurity inherent within Microsoft’s operating systems? That would help the company regain some faith within the PC world.

Think how amusing it might be if the CEO of this huge software company stood up to the government (it wouldn’t be the first time or the first government) and told them to back off when it comes to cloud security.

Imagine if he ensured user privacy when people were on Microsoft’s platforms, masked IP addresses, disguised communications and unbreakable security. No back doors permitted. That would sure help Microsoft regain believers within the corporate markets, eager to use cloud services but not at risk of their precious business secrets.

Microsoft’s other enemy Google will be shown up by a switched-on slightly dangerous new Microsoft CEO: After all, where McAfee seems pretty open about his hedonistic excesses Google chairman Eric Schmidt, seems bland while it seems he enjoys his own hedonistic excess in private. Who do you trust? The person who is honest about what he does, or the one who keeps it quiet while telling others privacy doesn’t exist any more.

Leopards don’t change their spots. I suppose McAfee would quickly find himself moving between controversies. That’s great, he’d be the talk of the town and would have the opportunity to indulge himself in many different ways.

He could bring danger and excitement, scandal and a sense of unpredictability. Microsoft would seem exciting and interesting and the world’s press would reel in manufactured shock and awe as the maverick Microsoft McAfee threatened to turn the world upside down. This personal excitement would make Apple seem up tight and Google seem dishonest in comparison.

In wider historical context, people would be amazed at Microsoft’s decision.

The company’s public image would transform — it would be talked about, criticized, discussed, slammed and praised from all directions. The usual po-faced moralists would say one thing, the usual utopian pleasure seekers another.

It won’t happen, of course. Life seldom delivers a good story line — that’s why the resurrection of Steve Jobs caught so much public imagination.

Microsoft will probably hire some safe pair of hands who’ll draw the salary while watching the company disappear into the historical background. Instead of this unfortunate fate, I’d argue the company should take some risks. It’s way past time it did so.

It’s a shame in a way. Technology is not boring, so why should its executives be?

Google+? If you’re one of those who likes to use social media and also happen to be a Google+ user, why not join AppleHolic’s Kool Aid Corner community and join the conversation as we pursue the spirit of the New Model Apple?

4 Responses to “For Your Consideration: Microsoft ‘s CEO search could end with John McAfee”