Biological evolution is a great teacher.  In the known history of our planet, three great extinctions occurred, the last of which wiped out the overwhelming majority of all species extant at that time.  Life bounced back, in an unpredicted form.  In the last great extinction, the dinosaurs disappeared.   It’s almost as if our planet performed a great experiment, looked at the results, found fault, and wiped the slate clean. Let’s face facts, the pinnacle of the Jurassic Age was the Tyrannosaurs Rex. What exactly was that creature? Wasn’t it simply a mouth on legs?  It’s jaws were so huge that the forelegs had to shrink to near nothingness to allow room for the gigantic mouth. Evolution experimented with the mouth, reached the upper limit, found no good use for it, got bored and chose something else. That something else, I believe, was the brain. Just how “out there” can we make the brain?  Humans, I believe, are the upper limit. If we are not careful, I fear that this planet will shrug us off as impersonally as it shrugged off the dinosaurs. 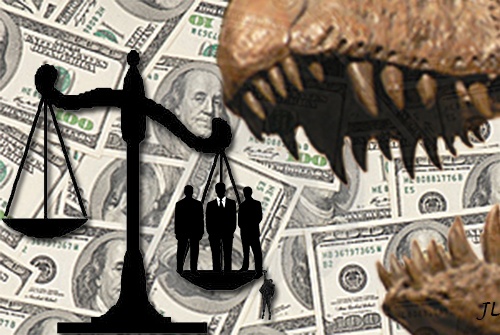 One of the manifestations of the human brain is unique in the history of our planet: unstable government. One could argue that ants have a form of government and even a class system. The system has existed unchanged for hundreds of millions of years. Canines organize themselves along strict lines, within which individuals may shift from position to position, but the system remains intact. Many species submit to a form of government, but the form is immutable. Not so with humans.

The governments that humans create range from control by the most brutal, to the illusion of majority rule. Governments shift from one extreme to another overnight, as revolutions, intra-country warfare or simply ennui change the landscape. The fact that we have survived as a species happened in spite of, not because of, government. To a simple mind such as mine, it seems that government serves an anti-evolutionary purpose.

Humans are resilient, quick to adapt, resourceful. We have adapted quickly to environments ranging from perpetual snow and ice to dark jungles profuse with predatory life forms. We are inventive. What we lack in native capacities we create for ourselves. We fly, yet we are born with no wings. We explore the deep oceans,  yet we have no gills. We create optics so that our eyes can outperform the eyes of an eagle. We have neither razor sharp claws nor the teeth of Great Whit Sharks, yet all creatures fear our weapons that can kill at distances inconceivable in the natural world. We are, I hope, what evolution, if it has intent, intended.

How then, among our creations, have we not managed to create a system of government that does not attempt kill off all of the talents that evolution has so finely polished for us? Even the United States Of America, founded, in the most unlikely fashion, by some of the greatest minds of the past thousand years, has reached that point, that all governments eventually reach, where the value of the government to the individual has reached negative numbers.

Let’s be honest here. What human talents were listed above? Does our government support and foster any of them? Be honest with yourself. Let’s look at resilience and adaptability as an example. We have created the Internet and mind bending tools to increase the power and scope of the individual. What has the government done? It has, at every twist and turn, erected barriers to stifle individual growth. Anonymous marketplaces, which give enormous power to an individual’s capacity to create and compete, are shut down and their creators are jailed. Privacy, a fundamental necessity to creativity, trustful communications and freedom of expression is being stamped out as rapidly as possible by our government. The Government’s fear of adversaries has made the general population – that group that the government was created to serve – of secondary importance to the survival of the government itself. It’s as if the government has taken on a life of its own, independent of the governed.

But government exists solely at the discretion of the governed – no matter how repressive or powerful the government may be. The uncountable number of revolutions peppering the history of the world bear witness to this truth. Government is not a living entity with life and breath of it’s own. It is a tool – a means of achieving harmony among the governed.

The question here is: How did this bizarre phantom of creation come about? How did a system, designed solely to serve, develop a sense of self-awareness and a desire to continue itself? The answer, I fear, lies in the darkness of the human condition.

I believe that we have reached a point in human evolution where we must weigh the future of our species on the scale of what we know to be true, against the weight of false dreams. We have now, at our disposal, technology that would make the human component of nearly half of our government obsolete. It would save trillions of dollars per year, not to mention removing the emotional/irrational component of the humans it would replace. Yet the mere mention of such a radical concept brings down wrath of unimaginable proportion from the very government that we are trying to improve.

I am not proposing some utopian world managed and controlled by automatons.  A paradigm shift of this magnitude requires careful thought and great care to avoid creating the very entity that will replace us. But, seriously, consider the 2.4 million employees of the Federal Government and ask yourself whether personal ambition, prejudice, greed or self aggrandizement have twisted the functions of a large percentage of jobs from a function of service to something altogether different. Ask yourself also, whether existing impartial artificial intelligence capabilities might be an improvement over “real” intelligence.

Change of this nature will not come without sacrifice. Those who conceive of and implement the tools to remove the imperfections of our creation (our government) will be chastised by all. And here lies the advantage of age: The older one gets, the less one has to lose. I can speak my mind as I please, go where I please, do what I please. I am nearly 70 years old. Try to imagine anything that could intimidate me. Torture? I have been married twice.  Death? It is my constant companion.  The revelation of my darkest sins? Be my guest. I will embellish for you. I have little to lose, but you, my readers, possibly have much to gain.

Artificial intelligence is real. It is not a myth or the dream of a mad man. We have now, technology that impersonates human intelligence to a high degree. And it is improving rapidly.

I am reminded of a short story by Isaac Asimov (or possibly Stanislaw Lem – my ancient mind gets confused), about a future society in which the law is judged by artificial intelligence rather than by human judges. The moral of the story is that a computer could never perceive the subtle truths in the voice or gestures of a human testimony. Only a human would be capable of such subtlety. Perhaps he was right. But even so, is it not preferable to a human judge who, in all cases, brings his or her own prejudice to the table of judgement?

For those who question – those who ponder the imponderable; for the seeker, the adventurer, the brave of heart — contact me:  mcafeenomad5@gmail.com. I have a use for you, and, perhaps, you have a use for me.

7 Responses to “THE EVOLUTION OF INSANITY”