Article by WHO IS WEB?
The phone rang, and I glanced at the caller ID, already knowing what it said, but still having to look.   A surreal flashback of the last 6 months went whizzing before my eyes as I reached for the phone…..another ring, and more images flashed, with tidbits of information stuck to them as they floated out of view…..ring.  I snapped out of it half way through that third ring, and managed to muster up a coherent ‘hello?’.  “Hello, this is John McAfee”  the other end replied in a voice I would know anywhere……which I (of course) proceeded to tell him.  It was an easy conversation of pleasantries and ‘reminiscing about the old days’ LOL, and then, just like that, I could tell it was time to get to the business at hand.  I explained my hope was to present parts of his life that were fascinating, thrilling and fun, but had been merely been skimmed over in the past.  I wasn’t interested in talking about Belize (not now, anyway), but instead really wanted to hear the fantastic tales ~ the good, the bad, and the ugly ~ of a life that spanned 62 years of adventures before Ambergris Caye and Orange Walk were on the stationery.  “That would be great” he replied. I could hear the smile at the other end, and that made me happy.  It would be good to hear him laugh. I wondered where he would like to start, and without missing a beat, he said “Aerotrekking” and then explained he remembered me expressing great interest in it…..that was nice.  Actually, I am fascinated by the sport, and plan on taking flight myself…….when I grow a set.  😉 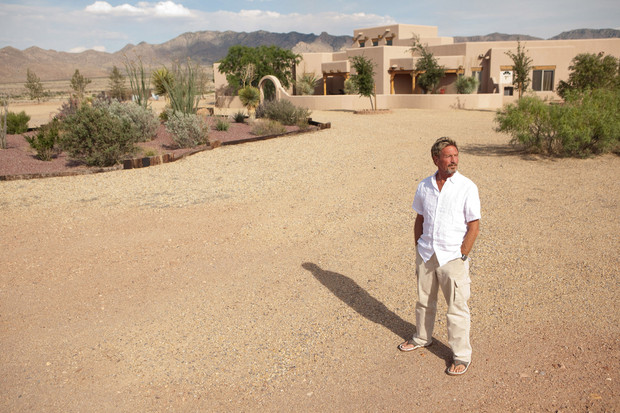 Jumping in with both feet and rattling off the questions would have been great, but instead,  I clumsily blurted out a couple of silly fillers, feeling unprepared.  Mental note:  next time, we pick the subject ahead of time.  The fact is it didn’t take long for me to admit to JM that I’d never actually interviewed anyone before.  I’m sure there was a small chuckle, but in true McAfee style he attempted to ease my nerves with “Well good, then this is your first”.  It worked.  Everyone knows the basics, that he and long time girlfriend Jennifer Irwin moved to Rodeo, New Mexico in 2003 after falling in love with Aerotrekking, but I had to ask, it was on my list…..