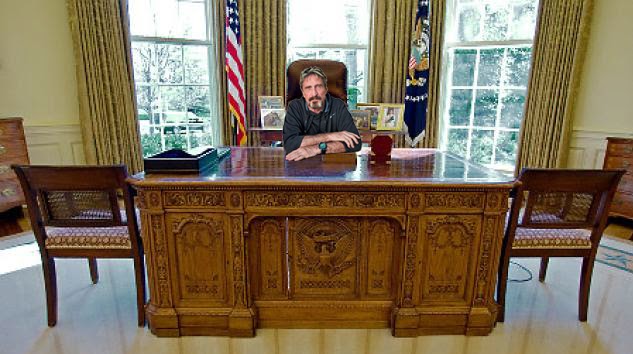 Never say Never. That, ladies and gents, is exactly how I feel each and every time someone inserts John McAfee into any venture. Does he want to be Microsoft’s CEO as voted by the Tech community?  Or how about JM for President of the United States, a suggestion that has been made time and again, either online or by direct contact?  Should he pick a State, and run for Governor?  Or maybe work with the Government to fix this Healthcare debacle? Just kidding on that one…we already know the outcome of that.  The people had spoken, now I had to know what John himself thought of all this.

We had some catching up to do.  He’s been busy lately, with seminars, TV interviews, and a new company; Future Tense.  It was good to hear his voice on the other end of the phone, and we were quickly back to our normal rapport.  We shared a huge laugh over Toronto Mayor, Rob Ford’s latest comments, which (after almost falling over with his ‘plenty to eat at home’ comment) ultimately led us to honesty….. or the lack thereof.  If JM ran for President, there would be no need for anyone to do much more than Google him to get “the dirt”.  He told me about a funny conversation he recently had when the topic of him being a Presidential candidate came up….. “They asked me”.… ‘Mr. McAfee, have you ever smoked marijuana?’ ‘Have you ever been unfaithful to your wife?’  ‘Have you taken any other types of illegal drugs?’  ‘Have you ever……?’ “YES, Yes, yes……and YES”  he replied  “There are countless articles where I have openly admitted my past behavior” “I have taken more drugs than you collectively can all carry”. All the time, money and nastiness spent trying to dig up shit to smear on him, would be for nothing. “The opposition would be helpless….there is no smear campaign they could mount against me without looking completely ridiculous”   It’s out there already…..exposed to the world by him.  “No one would have any doubts about my honesty….really, who would you trust?…..the guy who said he didn’t inhale, or the guy who said he’d been unfaithful, sold drugs, and done it all?”  I know which one I would trust.  Quite frankly, I’ve never understood the “attempted cover up” of past behavior.  We’re all human……lay the cards on the table, let’s see your hand.  For every piece of dirt found on a potential candidate, there are probably two more they’re still trying to bury.  And when the sordid details are exposed, their apology is hollow, making “I’m sorry” really mean “I’m sorry I got caught”.  That is not the kind of leader I want.  “Then they told me  ‘the thing that Americans need most in a leader is charisma and excitement’  and I realized they were completely serious”.  Agreeing wholeheartedly that he possessed both those qualities, I added that with those character traits, he would be able to talk to all people, and find amicable solutions.  “That’s right, it was actually one of the points they made to me” .

There have been blog comments, and Tweets, all stating ‘McAfee for President’.  In an email,  a member of the Patriots Freedom Network told JM he is  “One hell of an American”, and encouraged him to think about running for President.  His reply:  “I thank you for your kind vote of confidence, however, I am not sure that America is ready to take an unflinchingly honest look at itself.  I have no interest in half measures- life is too short for such nonsense, and the full measure of my participation would require such profound changes that I fear the powers that be would not let me live long enough to enter office.  I am not afraid – please be assured of this – but it would be tragic to waste the time of your organization and yourself when you might easily find some candidate who may have some possibility of succeeding.”

More proof that McAfee for President is taking hold, is this obvious ‘left tongue in right cheek’ video, where the host lists the reasons why John McAfee would make a great Republican candidate.

So I wanted to know…..’hypothetically’ what actions John McAfee would take if he was our President.  “I have no interest in being President, however……….

If I were the president, my first act in office would be to declare product packaging made of that indestructible, virtually impossible to open, clear plastic material illegal.  I would further have the NSA track down the inventors and other perpetrators of said packaging and charge them with crimes against humanity.

My second act would be to identify the person within the Commerce Department who came up with the idea of placing annoying tags on mattresses that say ‘Do not remove under penalty of law’, and require them to undergo therapy.

My third act would be to randomly fire a good three quarters of all federal employees, give the remaining one quarter a fifty percent raise, and then demand that everyone start doing real work for a change.

My fourth act would be to lobby Congress and the Senate to please stop working on Government issues, or on any issues they had previously deemed relevant to their jobs.  I feel that a ‘hands off’ approach to Government can’t hurt us for a while.

My fifth act would be to sit quietly in a corner and read a pile of good books, until the unlikely event that a President was really needed presented itself.

Is it any wonder so many people want him to lead?  With those answers, I think it’s more than clear.  We talked about a Gubernatorial race, Jesse Ventura in Minnesota, and the forward thinking States, where honesty is valued higher than image, that would Love to have a Governor McAfee. I asked if he had heard that the candidates in Florida have projected they will spend in excess of 100 MILLION dollars EACH on their campaigns.  His reaction was similar to mine…..“How bizarre is that?”  he began ” I would have a budget closer to zero dollars, give me a Skype connection, and I could talk to whoever. What could they possibly be spending that money on?”  I snickered.  “No, that’s just ridiculous.  I would run my campaign entirely on the Internet……that would be my focus. Instead of moving myself, my staff and everything else, I would stay in one place. I would be the first person to run a cost free campaign.”  We discussed the insanity of spending that kind of money for any election, never mind for Governor.  It completely removes the possibility of anyone without connections and the ability to raise 100 Million dollars holding a high public office position.  “They are wrong.  They are using the Internet as an adjunct, instead of the primary focus.  To me it should be the only focus. I would reach far more people that way.”  We talk about the fact that over 4 Million people viewed his video, and how that could easily be parlayed into a Political campaign.  “I promise you, using social media would work, and the need for that kind of money is ridiculous.  Unfortunately, the ones who have that much money are generally not the sort of people we want running our Country.”   I decide to press him, and ask if he would ever consider running.  “If the impossible were to happen; which is someone would guarantee my security, given the fact that the establishment would have to be turned upside down……..”  NEVER SAY NEVER.

But what about a more traditional position, like CEO of Microsoft?  One online poll had JM voted as the best candidate (28.4%) for the job, beating out Bill Gates (21.5%).  Over at Computer World, blogger Jonny Evans thinks the idea is fantastic.  He lists a multitude of reasons why it would work;  “The company doesn’t need some corporate fat cat to lead it into its last battles, it needs a leader with charisma and excitement – someone who may be prepared to do the unexpected thing”  he says.  He gives a plethora of reasons, and speculates on the amazing things JM could do for the company.  “He could bring danger and excitement, scandal and a sense of unpredictability.  Microsoft would seem exciting and interesting and the world’s press would reel in manufactured shock and awe as the Maverick Microsoft McAfee threatened to turn the world upside down.  This personal excitement would make Apple seem uptight, and Google seem dishonest in comparison”  and he continues… “The company’s public image would transform–it would be talked about, criticized, discussed, slammed and praised from all directions.  The usual po-faced moralists would say one thing, the usual utopian pleasure seekers another”.  Read the whole article, it’s really good.  I wondered out loud how difficult it would be to deal with the political bullshit that comes with Positions of that magnitude.  ” It would not be something I was interested in dealing with.  I  would get bored of the whole thing rather quickly”  His current venture will keep him busy, and provide lots of excitement, so I’m glad that’s where he’s focusing his energy…..for now.  And to Toe Knee, who asked about Quorum Sensing…… NEVER SAY NEVER.

And so, with this and much more going on behind the scenes, I just want to say, what a difference a year makes.  Yep, that’s how long it’s been since JM first put pen to paper, and began to chronicle his horrors in Belize, and necessary escape to safety.   Oh, I almost forgot:  his advice for the Rob Ford’s of this world “Don’t mix crack cocaine with Politics”    LMFAO.

Thanks to Sandwillow for the graphics. 🙂