HomeWe are now Air Force One
Posted by: WhoIsMcAfee , December 11, 2013

How does President John McAfee sound? 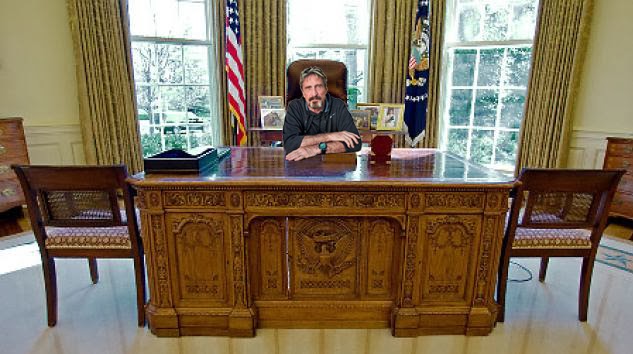 John McAfee, of all the ways to introduce him, all the background we could go into, the headlines – all that stuff sort of seems to fade into the same constant tone – eccentric, washed up, he’s in trouble – those things are easy to find out there . You know who he is and you’ve heard all the stories. But just hold on, you can judge that better when the biography comes out and the eventual movie as well. Besides all that when you get a chance to talk to him he suddenly starts making a whole bunch of sense – and no doubt adds a whole lot of flair, but still a lot of sense and a fascinating purpose. McAfee has a history and presence in the security business that just can’t be denied and though he is very much separated from the company that bears his name, he is quite in tune with the industry as he is launching a new venture that is in development.

The focus of the discussion with McAfee was cybersecurity predictions for 2014.  This series will be running all month with input on the road ahead in the security industry from a number of points of view. With so many current-day national matters centered on technology, the discussion with McAfee drifted to the question of leadership on these matters and what should be done about them.  Let’s dig in –

SiliconANGLE – So many of today’s most critical issues center on technology matters, and especially on security. We’ve seen the massive Chinese cyberespionage and we’ve also found us in that very same espionage game, it’s a cyberspy war really. We regularly hear about how our financial, energy, and transport infrastructures are regularly cited as weak points. Then we have the NSA and other federal agencies and all that is coming out around this. How important are these issues in 2014 and how can a better job be done? John McAfee – Let’s look at current state of affairs. To start, we have people managing technology programs that should not be doing so. It’s the case in every branch of government across the board. Obamacare is a good example of this failure because if you look at all the rules and regulation of government style contracts were written in an age where things didn’t’ change every six months. That’s what you have today in the world of Android, voice systems, the cloud and so on. Rapid updates are part of the landscape now. Government regulations take two years just to get them read through, approved, rewritten. Government management is accustomed to 15 year cycles. The bureaucrats that are running this operation just shouldn’t be. They haven’t adjusted to this well and they have no reason to.

This is the fundamental issue – technology is so rapid it takes someone that knows it to get it done right. You have to have the right people in there that know way to do it. They need to know the tech landscape and the people behind it – what motivates and what de-motivates them. I predict that we will see that because of Obamacare hundreds of thousands of Americans will be impacted, and lose money due to this colossal monstrosity. That will motivate them. So at every level with so much importance placed on technology with all those things that you mentioned – this is a congressional election year and the execution of technology initiatives should be a greater issue or even the biggest issue from here on.

SiliconANGLE – Would the same go for the executive branch? John McAfee – I’ve never seen such a top heavy thing than the US government than right now. Benjamin Franklin, George Washington and Thomas Jefferson would hang themselves.

SiliconANGLE – Let’s rephrase that – This country has had a long history of military generals who later became president, which continued into modern times. And 2 of the last three presidents have come from the legal ranks. Given the increasing importance of technology- arguably a foundation of the military, how do you feel about somebody emerging from the world of technology step up into the role of commander-in-chief? John McAfee – 2016 – those are all big, big concerns and if you look at the most agile, successful industries you will find technology. This country is built on it from the very beginning.  An executive from the technology sector is used to getting things done on the bottom line. Isn’t that what matters?

Look at the state of modern warfare – it’s all about computer technology. Let’s get a little scary here – all of this arsenal, the control systems, the tactical payloads, the targeting and all of it are controlled by computers and software. Just imagine the risk if someone else were to gain control of them. This could be something that’s an inside threat as well as outside. Imagine some clever hackers – and they’re out there – infiltrating something like drone systems. What if those drones were turned against ourselves? What if we lost control of these 50 caliber rifles which are completely controlled by computers? These are big risks.

We live in a world where technologists have the ultimate power in warfare. Our guys are smart, but the bad guys can be smarter and there’s always that human risk that can take it all down. Right now there’s hobby hackers having fun taking over drones. Just think what a concerted effort by a foreign government using the best people available to them, with the best tools that could be put into their hands. If they wanted to try and take over all the weapons here in the USA, I promise that is a possibility. So a commander-in-chief, the president has to be aware of all this, how important it is- the threat. He has to instill leadership, military leadership, and business leadership. The way this Obamacare thing has come together, how do you think the rest of these operations are running? The only things that seem to work well was his re-election site and this surveillance.

SiliconANGLE – So who would make a good technological presidential candidate? Is that person you? Or somebody like you? John McAfee – No. It’s not me. Someone like Bill Gates would be great. (Editor’s note: McAfee’s namehas popped up in a couple of places as a potential CEO for Microsoft)  But I have no interest in anything like that. Actually, I have been approached by several groups, in some cases on the fringe of things, but I’m the most unlikely candidate on the planet. I mean -the Libertarian party sent out feelers a couple of weeks ago to gauge my interest in playing some role on their ticket. I have no interest in politics. But I did have a little fun with it and laid out a five point plan to cure America of its ills:

Honestly, I typically respond with a canned message that says basically that I am not sure that America is ready to take an unflinchingly honest look at itself and I have no interest in half measures. I am however always happy to share views, opinions and any relevant advice.

6 Responses to “We are now Air Force One”