Some people have posted inflamatory comments about a couple of subjects that, clearly, they do not have a full understanding of.  The first is the exif data (the date, time, type of camera, etc.) attached to many of my photos.  Anyone who has done a photo montage will know that the exif data for the final product will be the exif data for the lowest element of the montage.  Since most of my photos are montages, with a variety of exif data attached to each, the exif data attached to the lowest layer is the data that gets attached to the entire montage.  Frequently I apply a base layer underneath a photo with the top photo having an opacity less than 100% in order to brighten, dim, color or otherwise improve the looks of a photo.  I create the underlayer by photographing a blank wall, a floor or any other uniform body that I deem will give the effects that I want.   I am travelling and shoot whatever is around me that works.  You can try this in Photoshop, for example, and check the exif data of the end product if you doubt any of it. For example, the following two photos have been shown very early on in this blog (last year), and in one, I am obviously still in Belize, since I am with Sam and Amy.  The other was taken in September by Chad when he visited Belize.  Yet the exif data shows January 16th of this year 0n both of them.  This happened because I overlaid the photos on top of two separate photos taken on January 16th by my Sony camera, used 100% opacity – so that you can compare to see that they are in fact the same photos as those published previously, and then cropped it: 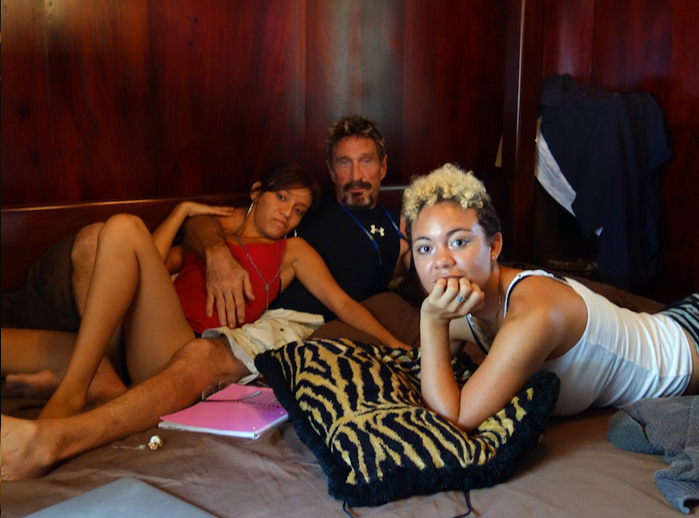 Check the exif data (those of you complaining about the exif data) and see for yourselves. I do not like having to explain these things just because some of you are looking for anything – anything at all – to prove I am being deceptive.  I am hugely busy and this distracts from my work immensely.  If you want to keep looking for things that I do wrong then please do a little more research into your subject before you jump to conclusions.  There are in fact many of hundreds of reasons why exif data for a given photo is not indicative in any way of the date in which a photo was taken — not least of which is that any idiot can change the date and time on the camera to any date and time that they choose and then take a picture.  The users chosen date will show up in the exif data.  This is why I ignored your complaints at first. I am not an idiot.  If I wanted to decieve you, I would purposely have changed the camera date, or done any one of a hundred other trivial things to pre-date a current photo.  Could you possibly think that I am unaware of exif data?  I am too busy to waste time in deception.  I do what I do, if you don’t like the exif data, then at least give me the benefit of the doubt by considering the limitless possibilities why the data is not the data you wanted.  It is too time consuming to satisfy those few of you who insist on trying trying to find holes.  From the majority remainder of you, please ignore this rant. The second issue is Amy’s description of the brown powder I was making.  Please read my extremely detailed Bluelight discussion early on in this blog.  If you read the actual Bluelight posts, you will see hundreds of photos that I submitted about making this impossibly mythical drug – Tan-MDPV.  I obviously had to do something to create authentic looking substances.  The following blog question and my answer should suffice for all of you. Read the Bluelight post!!!! There were hundreds of photos I posted of the “impossible” process. Where was I going to get the photos????? I did them myself. Amy helped me. There were brown substances, white substances, clear substances, cloudy substances. Burnt baking soda – Acetone and sugar from the lab – dozens of substances to make it look real. Amy is bright but clueless. I always told her the stuff was poison (most probably was) and not to put them in her mouth (which she did with almost everything – like a two year old). How can you talk about something (Bluelight) when you have never read the full posting on Bluelight (400 pages)? If you want to post any more negative stuff about something you have never read, seen, or know nothing about, then at least read it first. So no, I have nothing more to add. There is nothing to add, and there is not now, nor has there ever been, a discrepancy. The third item is the comments about the capacity of the recording devices that were used.  It is not rocket science.  The replacement of an ultra-cheap Chinese battery with a high capacity lithium battery (plenty of vacant room in these devices) and the replacement of a 2 gig micro SD card with a 32 gig micro SD card (which a mentally impaired six year old could do) does wonders to the amount a time a device will record.  Two of the devices supported 64 gig cards.  Software glitches limited the remainder to 32 gigs.  There are many other modifications that we made that I did not, and will not, tell you about.  But, again, a small child could quickly look and any one of these devices and make a dozen simple changes that would improve the device by an order of magnitude in ten minutes and for a cost of less than $30.  Please, naysayers, use your heads. Again, I am sorry for my testiness, but a tiny fraction of followers here create 95% of the problems, and 95% of my work, by trying to create issues over absolute nonsense, or try to incessantly resurrect  issues that have been put to bed many times.  These users are either doing this out of malice or out of ignorance.  Anyone who had read the Bluelight posts on the Bluelight board would not ask the questions that have been asked.  Anyone who knew anything at all about exif data knows that the data is absolutely meaningless if someone wants a different date, time or location.  If you few folks are not doing this maliciously, then please use your head and think a little before you post inflamatory statements.  If you are doing it maliciously, your I.P. address will eventually be banned. Thank you. P.S.  A plug for the upcoming movie: IMPACT FUTURE MEDIA

209 Responses to “In Reply to questions”