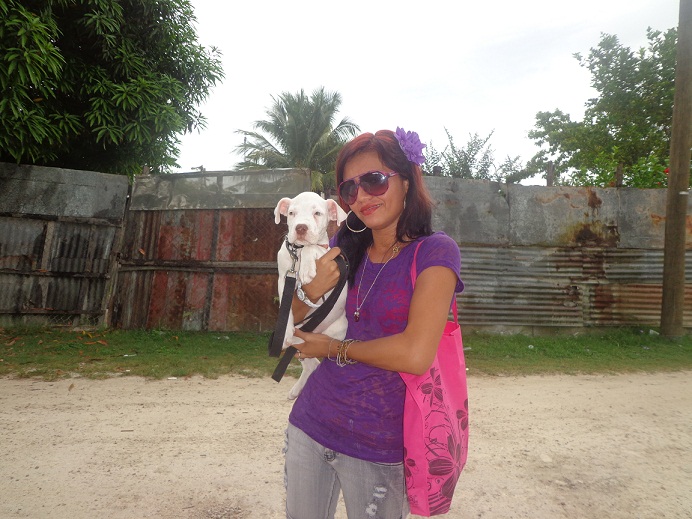 Samantha’s native tongues are Spanish and Creole.  She has only recently begun to master English.  She insists on using it exclusively, however, an idea that I encourage.  English is a powerful tool in the current world.  I have left her text exactly as she wrote it.  This is her first exposure to blogs and and her first blog entry:

im 20 years old. i have not had an easy life. The things i had to go through was painful but at the end i learn from them. while i was growing up in a family of 8 it was really hard for me. my little sister an i had the hardest things to do, we had to wash everybody’s cloths by hand sometimes with a bucket and a long pipe ,we would put the durty cloths in the water and detergent and would take the pipe and bet it for about 20 minutes each of us would take turns to do so.when we had done doing this we would make lunch on a fire hart. my brothers would go to the bush and find old wood and bring it for us to light the fier so we could cook on it an make luch for all of us.I grew up in a very poor family and also abusive my life has not been to fun ,everyday was painful for me and my brothers and sister,sometime we would go with days not eating because my dad did not had a straight job .Our house was made out of a type of would call primenta i had 2bed and a ketchen ,we all had to live in this little place an could not coplain because we knew that we didn’t haditas good as others but one thing we had life although it was not a life i would like to live. Then came along John who most of you know .when i first saw him is when he came to a village called carmelita . Everyone was talking about this white man at this point i didn’t kwen his,i who is a every inqisitive girl want to meet this man an see who bad he appers to be in the eyes of other . so one monday evening my and a friendwent to his house i did not want to go alone cause people were saying that he feeds kids to the crocz.so i ask my friend to come along with me as ireach is gate with fair not knowing or things what this man would say or tell me i was just friking norvious.So i apruch the securite gard and said to him,”i wa talk to the bass man you could plz call a fu mi”he smile and simple turned away and pull out his walk man an said “bass theres a girl an a guy here to see you” then i saw this white guy coming from about 2feet from the gate with gun houster around his shoulder.He then ask “can i help you “i said to him with fear’ i heard thatyou said if anyone needs anything or help gto come to you so i did so.”he then said to me “what do you need.”i then reply”i need a job can you help me” he then said “do you drink’i said”yes,i do”then with out thinking of it he said to me”am sary but i dont hire people who drink” i the hury and said to him,”i could stop drink mister i really can i just need a jod becausemy mom has no money and she recently separated from my dad.”he shake his haead an said”meet me 6 pm at the Amy house which am building in the village center.”so i went an he did gave me a job. John has been a great man to me an had done things for me that i am thankful of and will always be.I am a belizean an from since these people has been turmenting this man lifei had been by his siad because i see that he has been inocent ,for examlpe they are pointing fingers at this man that he had murder a nabier next door which is so low and also a lie cause that night he was with me the whole night we were seeing move an playing with my puppy i just got.also everyone who live in that house saw him their that night so i know he is clean .Im a belizean and am not taking part for him butif you are wrong you are but this country of mine is corupted an injustice and full of liers.I ceartenly cant live like this nor in a place that dose not have justice, we as the people should voice out what we feel an do something of it cause we are living in this place know one ealse.so as you see here in my country of belize is all a adventure for me as myy life.

42 Responses to “From Samantha”