My Fifth Recommendation:  LEVEL THE EGO – MAKE YOURSELF LOOK FOOLISH AS MUCH AS POSSIBLE.

Since many of our lives appear empty we try to fill them with our own ego.  It is an awkward way to live.  We consider ourselves to be huge and the universe and everything else to be tiny in comparison.  A Casual observer could see that this is incorrect.  The ego is difficult to shrink. I have found that one sure way of doing it is to make ourselves appear foolish or insignificant on as many occasions as we can.  My ego has always been out of control and, for me, only extreme measures had any noticeable effect.  I’ll tell you about my own efforts to contain my ego and perhaps these examples will give rise to more appropriate examples for yourselves.

Dressed as a well weathered derelict, I would panhandle on a busy street.  I have done this in nearly every large city in the States. 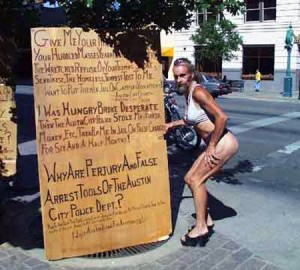 It is one of the most illuminating activities a person can engage in.  If you do this seriously, you will begin to look at your fellow man with an entirely different eye.  I have discovered that if you are of no importance whatsoever to another human being, then that human being tends to open his or her true self up more readily.  People who are, in the normal course of business, polite, kind and gracious, sometimes turn rude and petty when they are speaking to a person who is not really a person to them.  Other people who are generally attentive to their neighbors and even random strangers, will not look at you or even acknowledge your existence when you speak to them if you are below a certain status.  Homelessness appears to be at the very bottom of this unwritten caste system.

Panhandling never failed to amuse and educate me.  My most memorable time was in Ventura California in the late Fall of 2004. I went into a Goodwill store and purchased an old ragged hat and an old worn overcoat. I waited until 6 o’clock in the evening and set up shop in the alcove of closed jewelry store on the main street downtown. I made a cardboard sign on which I wrote “broke and stupid” and held it in front of me while I sat cross-legged on the ground. I placed a small box in front of me in which I tossed a few crumpled dollar bills and some random change.  I placed 5 new 100 dollar bills in front of the box, side by side.

My first customers were four Hispanic gang members who nearly passed me by. One of them noticed the hundreds and made as if to come over and scoop them up. He was grabbed by the arm by the tallest member, who whispered something in his ear, at which they all turned and went on their way.  I can only assume that the tall one thought I was a cop and the whole scene was a set up.

I plaintively asked each and every passerby for spare change, 99% of whom  ignored me as if I did not exist.

After 5 or ten minutes, two elderly ladies, looking much like regular churchgoers,  dropped a dollar in my box and admonished me not to spend it on drink.  I    promised I would not.

A  few minutes and a dozen or more people later (to whom I was invisible), a dark blue, brand new Porsche parked about four spaces up the street from me and out stepped a man and a woman, dressed to the hilt and wearing conspicuous, expensive looking jewelry.  As they approached I asked “can you spare a dollar?”  To which the man immediately replied, indicating he had nothing to spare.  I quickly grabbed one of the hundreds and held it out to him saying “I’m so very sorry for you.  Here then, take this.”  He looked dumbfounded and stopped in his tracks, but the woman, without hesitation, took the hundred and put it in her purse.  (That was a first for me, by the way).

The man wanted to know what was going on.  I explained that since he had no money, and I did, it was only right that I should share my good fortune with his misfortune.  He was unable to help me, so he claimed, but I was able to help him, so I did.  The 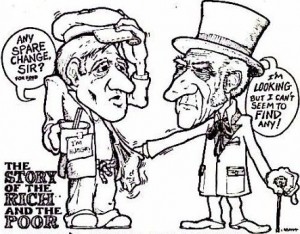 conversation quickly settled on the fact that they gave generously to the poor through contributions to United Way.  I asked why it was easy to give large sums through an intermediary but when an apparently small, but real need spoke up from the street, they were able to decline it.

The talk went on in from there in great depth.  At some point the woman began to cry.  Eventually, the woman asked if they could have a second chance.  I said “of course”.  She took her husband by the arm and walked back toward their car.  She turned and they again walked towards me.  “Can you spare a dollar?” I plaintively asked. The woman reached in her purse, gave me back my hundred, plus a dollar, and they walked on by.

Two of my current readers were observers of this event as it happened.  I hope I remembered it correctly. Please correct me if I misrepresented anything.

You don’t have to panhandle, of course, in order to shrink down the ego.  I’ve done hundreds of similarly belittling things that have worked equally as well.  Some of my favorites include: 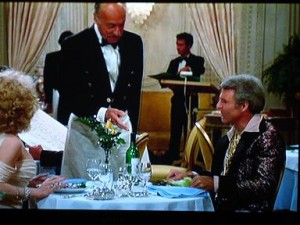 ~Taking a new date to a very fancy restaurant wearing absurdly out of fashion attire, then purposely mispronouncing everything on the menu, and acting awkward and out of place regarding the use of utensils and other unfamiliar objects, such as butter knives, tea strainers, etc.

~Renting an electric wheelchair from a medical supply house and spending the day pretending to be paraplegia in some public place.  There is nothing that brings the ego down quicker than thousands of pairs of eyes staring at you in pity throughout the day.

~Attending at least 10 AA meetings.  Get genuinely into the spirit of things.  Stand up in front of dozens of people and fearlessly and completely tell them who you really are.  It’s OK.  It’s safe.

~Doing some little foolishness every day.  Sing your favorite song standing in the checkout line at Safeway or some similar place (as Janice can tell you, I do this multiple times a day).  Or dance a jig while walking down the street.  Or wear a Clown Wig for no apparent purpose.

As Shakespeare (or possibly Baby Ruth) so beautifully said:  “To become wise, we must first become a fool”.

Thanks to SL for making the fun video.

Only two more recommendations to go…. 🙁     Be sure to check back tomorrow.